Where Does the Expression 'Throw Someone Under the Bus' Come From?

To throw someone under the bus is to criticize, blame, or punish them, especially in order to avoid blame or gain an advantage. People so thrown are typically in a vulnerable position. The phrase's origin is uncertain, but it likely got its start in British politics, where the phrase "under a bus" was already in use as a metaphor for misfortune or a conveniently-timed accident.

What does it mean to throw someone under the bus? Well, for the extremely criminally minded, it may have the literal meaning of shoving a person under the carriage of a large motor vehicle. Yet given the relative prevalence of this expression (and the relative lack of such assaults), it seems safe to assume that there is a highly figurative meaning involved. 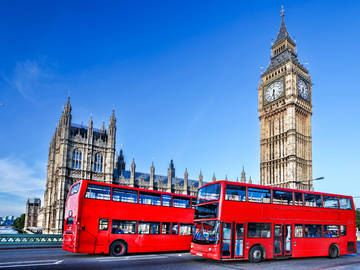 No one is certain where the phrase "throw (somebody) under the bus"—meaning “to betray or sacrifice a person, particularly for the sake of one’s own advancement, or as a means of safeguarding one’s own interests”—comes from. But there's probably enough evidence to throw British English under the bus.

Given that the words throw and under are part of the equation, it seems safe to assume that throwing someone under a bus is not a terribly pleasant thing to do to them. After all, when throw is encountered in a phrase, it often is in such senses as throw a punch, throw (something) in a person’s face, or throw (one’s) hands up in disgust. Under often plays a negative role as well, appearing in such turns of phrase as under the weather.

So no, to "throw someone under the bus" is not a nice thing to do. Merriam-Webster's definition clarifies: "to criticize, blame, or punish (someone in a vulnerable position) especially in order to avoid blame or gain an advantage." But where and when does this colorful expression come from?

Throw under the bus became enormously popular during the 2008 presidential election, although it had a certain degree of prominence prior to that among sports journalists. When it began being used considerably more in the mid and late-2000s, there was a good deal of interest in the origins of the phrase, and so as a result the Internet is now replete with wrong information on this subject.

Origins of The Expression

The origins of throw someone under the bus have been attributed to minor league baseball, Cyndi Lauper, the slang of used car salesmen, and various other improbable sources. As with so many colloquial expressions, we will likely never find its first use, but we do have information that points in a likely direction.

The earliest written record we have of under the bus being used in this fashion comes in 1980, in reference to a British politician.

The reaction of the Right to the events of the last year have varied depending on where in the spectrum they stand. Some still pin their hopes on the “under the bus” theory which has Mr. Foot being forced by ill health—or just the pressures of the job—to give way to Mr. Healey before the next election.
— Elinor Goodman, The Financial Times (London), 10 Dec. 1980

While the above use certainly has the placement of a person under a bus being used in a metaphorical fashion, it lacks the sense of betrayal that is a part of its current usage. That comes less than two years later, again found in British politics.

The Conservative benches listened to her in silence. She was in deep trouble and the lobbies hummed with the prospect of her departure. President Galtieri had pushed her under the bus which the gossips had said was the only means of her removal.
— Julian Critchley, The Times (London), 21 June 1982

It seems quite possible that the expression throw/push/shove someone under the bus dates to Britain in the late 1970s or early 1980s, especially when considering that there was already a similar under a bus expression in use there.

There is an amusing little parlour game much favoured by politicians. It is called “Let’s kill the Leader,” and, when played by Labour loyalists, it begins “Supposing Harold Wilson were to go under a bus...”
— Hugh MacPherson, The Spectator (London), 23 Jan. 1971

Tony Benn, the greying, pipe-smoking enfant terrible of the Left, is Denis Healey’s arch-rival with the Labour Party. The two would be top contenders for the leadership if Prime Minister Jim Callaghan were, in the British phrase, to fall under a bus.
— M. B., Barron’s National Business and Financial Weekly (Boston, MA), 28 Aug. 1978

MORE IDIOMS: Learn the origins of hundreds of idiomatic phrases