Why Do We Park in the Driveway and Drive on the Parkway?

Finally, the answer to one of life's enduring questions

English is full of seeming contradictions: ravel means both "to knit up" and "to unknit," inflammable refers to something that's flammable, and so on. George Carlin, the late comedian, often poked fun at English, and in doing so, highlighted another one of these contradictions: why do we park on the driveway but drive on the parkway? 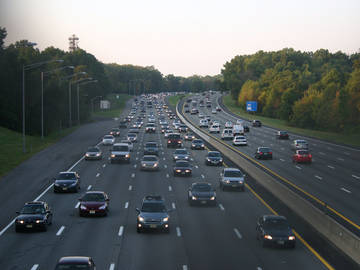 The word 'parkway' originally referred to a broad road through a park. Like 'driveway', it predates the invention of the car.

First, a defining of terms. A driveway is "a private road giving access from a public way to a building on abutting grounds," and in America, we tend to park our cars in the driveway since driveways typically come right alongside one's house. A parkway, on the other hand, is "a broad, landscaped highway." The origins of each of these words seems pretty clear—drive + way, and park + way—but if that's the case, when why don't the verbs that are the originating point for each word (drive and park) match up with the meaning of the derivative noun? In short: we don't drive on driveways, and we don't park on parkways. What gives?

English is secretly serpentine: what looks like a straight line between words sometimes isn't. That's the case with with both driveway and parkway.

Both words came into written use in the 1800s, long before cars were even a glimmer in Henry Ford's eye. Parkway originally referred to a broad road through a park:

The most important improvement made of late in the general plan of cities has been the introduction or increase in number and breadth of parkways.
— American Cyclopedia, 1875

So there's the connection between parks and parkway, but why do we drive on them? Parkways were the perfect places to drive a carriage down for a scenic jaunt out. Once automobiles came on the scene, parkways became the province of the car.

Driveway came into written use a bit earlier than parkway did. Unlike parkway, the word driveway didn't refer to where the path was (a drive), but what the path was for (driving). The earliest driveways were roads that ran alongside barns, where vehicles like wagons could drive up and either offload cargo (like hay, food, or livestock) or take on cargo (like hay, food, or livestock):

The building should be so placed that the barn floor could be laid upon the beams, and the drive-way be into the end directly under the roof.
— Henry Colman, Second Report on the Agriculture of Massachusetts, 1839

Of course, these access roads onto a property became handy places to park vehicles, and when the automobile age began, these off-street roads became ideal places to park the family car.

In time, the verbs that we used with parkway and driveway became fixed—drive with parkway and park with driveway. And George Carlin's stand-up routine about the nonsensical nature of English gained one more data point.

MORE TO EXPLORE: How 'Way' Became a Word for 'Road'